“I am delighted that we have been able to successfully conclude the sale process which has been thorough and extensive. The Board decided to accept NESV’s proposal on the basis that it best met the criteria we set out originally for a suitable new owner. NESV’s philosophy is all about winning and they have fully demonstrated that at Red Sox.

We’ve met them in Boston, London and Liverpool over several weeks and I am immensely impressed with what they have achieved and with their vision for Liverpool Football Club.

“By removing the burden of acquisition debt, this offer allows us to focus on investment in the team. I am only disappointed that the owners have tried everything to prevent the deal from happening and that we need to go through legal proceedings in order to complete the sale.” 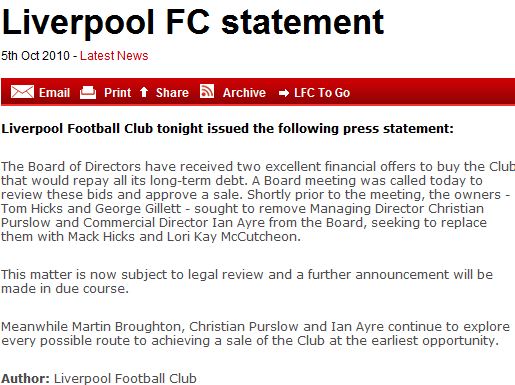