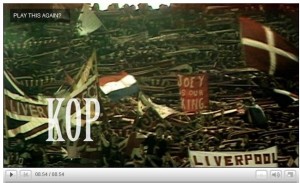 
POOR SCOUSER TOMMY THE UNTLD STORY – FROM THE URCHINS

Near Bootle docks in a terraced street
where kids played football in bare feet
stands little Tommy, 8 years of age
most kids were poor in pre war days.

They’d have to borrow, beg or steal
and rarely ate a decent meal
but no one held their heads in shame
for kids back then were all the same.

Together with his little mates
he’d peer through the dockyard gates
at merchant ships from far and wide
who’s cargo’s had them hypnotized.

They never stole for gain or greed
they stole for basic human need
a sense of ’conscience’ did not exist
thats just a word used by the rich.

As Tommy grew into his teens
he’d make a shilling by any means
he’d steal from Peter to pay back Paul
to watch his hometown play football.

To Anfield every other week
he’d amble through the cobbled streets
climbing gas lamps with dirty hands
stealing apples, and skipping trams.

He’d stand upon a wooden crate
to watch Kays team of 38
Mcdougal and Busby played at half back
while Balmer and Kinghorn led the attack.

Like all young lads he had no cares
life is such bliss, when your unaware
one big adventure from day to day
just eat and sleep, and steal and play.

For boys like Tommy, knew not their fate
a world wide conflict soon lay in wait
their youth was halted in its tracks
as war torn Europe, faced Hitlers wrath.

Now aged 16, Tom soon filled out
and learned to put himself about
he’d watch his team at anfield play
he’d sing and shout, but got carried away.

He developed a taste for the local brew
and before each match, had quite a few
he’d run on the pitch to the penalty spot
but was unfortunately thrown out quite alot.

He wasn’t malicious, cruel or mean
his heart was big, but his pockets were lean
but like all folk from pre-war days
he had respect for his elders ways.

The sound of cheering and waving rattles
would soon be swapped for guns and battles
aged just 19, who would have guessed
he’d soon do battle, with Rommels best

Together with his older brother
he kissed the cheek of his tear-filled mother
in his uniform, with his packet of fags
and his lucky red hat, in his old kit bag.

Then off he went on a southbound train
en route to the battle of El Alamein
to the royal artillery, he was commissioned
with the 51st Gordon Highland Division.

He arrived in October of 42
as Monty’s 8th army were turning the screw
but nothing prepared him for what was to come
in the blistering, searing north African sun

They were given their orders, to relieve the front-line
but the path to Tripoli, was ladened with mines
so they’d all split up into 12 man platoons
then tip toe with death through the minefields and dunes.

There was just no escaping the sweltering sun
or the deafening noise of the bresa guns
there were flys in their thousands and nothing but sand
in this god forsaken war torn land.

They came to a clearing by a salt marsh trail
where abattle enraged, on a frightening scale
the shell fire was deafening, as smoke filled the sky
Tommy muttered a prayer ‘Lord dont let me die.’

He reached in his pocket for his lucky red hat
things were looking real bad, for these desert rats
the German panzers had attacked from both flanks
leaving smouldering corpses, of burnt out tanks.

Then orders were given by Tommys command
to gain high ground and make a stand
he kissed his hat , as he put it away
then advanced with his troop, on his final day.

In the mayhem which followed, on that hot afternoon
there was all but 2, of his 12 man platoon
they were trapped in a crater, left by a shell
all around lay the bodies of those who had fell.

The soldier with Tommy, was hit and in pain
his trembling hand, held his cross and chain
he said ‘Get me home’ with a tear in his eye
‘Just leave it to scouse’ came Tommy’s reply.

So amidst the screeching of mortars and shells
he decided to dash, through this living hell
he took a deep breath, closed his eyes
touched his hat once again, then climbed over the rise.

But Tommys dash would be ill fated
as deaths dark angel calmly waited
for as he stood to make his run
he was sprayed with bullets, from an old nazi gun.

He danced in a death like a marionette
falling back in the crater, from which he’d just left
his injured friend crawled across where he lay
but the bright burning sun was now fading to grey.

As the blood from his headwound flowed into the sand
his weakening grip, dropped the hat from his hand
the lucky red hat which he treasured so much
lay tattered and bloodstained, in the African dust.

Then visions flashed before his eyes
of his Liverpool home, and times gone by
his tearful mother, and his childhood mates
waved up to the sky, from the dockyard gates.

As the African sands of time ran dry
a tear appeared in Tommys eye
as he thought of Anfield so far away
where he’d no longer watch his idols play.

It was at this point just before he died
that he turned to the soldier by his side
he reached out a hand, and pulled him near
then whispered his last words into his ear.

The month was January of 43
about 20 miles east of Tripoli
in the blistering heat, there was something cold
it was the body of a boy, just 20 years old.

The last words he uttered, through his dying breath
are a lasting legacy to Tommys death
some 60 years after his heavenly call
his words are now folklore, sang by us all.

The sacrifices that those boys made
seem long forgotten by folk these days
they died so we could all be free
they died for the likes of you and me.

So every time we sing that song
we must remember right from wrongs
we’ll sing it loud, and recall with pride
poor scouser Tommy, and the millions who died.