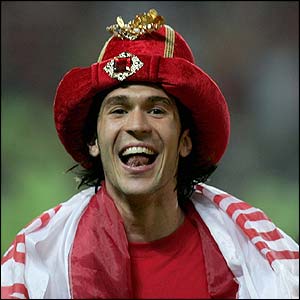 First of all I’d like to apologise for not having been back in touch sooner, but I needed to take some time to take on board all the recent changes and then to put down these words for you.

I’m sure you will understand.

I would rather this be a letter of thanks and gratitude, not simply a goodbye.

Yes, that’s right, gratitude, because that is the word that best sums up my feelings for you all.

Taking the decision to change clubs hasn’t been easy. Not easy at all.

I’ve experienced three fantastic years at the club and in the city. Three years in which together, the fans and the team, we have accomplished some fantastic achievements, and I’m sure that these successes will continue to be repeated in the near future.

You know that I like a challenge and that I don’t just settle for second best.

Back then Liverpool Football Club gave me the opportunity to be part of an ambitious plan to put the Reds back at the summit of the game.

I think that together we managed to achieve that.

As I said, I do like challenges and in spite of the fact that at that time I was playing for my home town club, one of the biggest in the world, I wanted to be a part of that project that was being presented to me by Liverpool, and so I accepted the challenge.

Now, after three seasons in the Premier League and having won some major trophies, the chance came up for me to return to La Liga and be part of a new project at a club I already knew.

The idea of enjoying things in a Spanish club like we experienced together at Liverpool over these last three years appealed to me, and that’s why I accepted the offer.

I want to thank everyone working at Liverpool Football Club for how well they have treated both my family and I, making us feel at home from the very first day to the last.

I also want to thank the management, coaching staff and directors for the opportunity they gave me back then to be part of such an important and well-loved club as Liverpool. A club which has helped me to grow as a footballer and where to date I have enjoyed the biggest success of my career.

Without a doubt, this success has been possible thanks to the outstanding group of players with whom Ive been able to share a dressing room over the last three seasons.

I’m not going to mention anyone specifically, because I think that the secret of this team’s success has been exactly that: nobody wanted to stand out above the rest and there has always been a great togetherness in the squad, which made it into something more than a group of players, it was a group of friends.

Thanks to all of you for your help and your friendship.

I’ve left until last the thank you which for me is the most important: Thank you to the supporters.

Your support allowed me to settle quickly at both the club and in the city, and you made me feel really at ease with you all right from the word go; that’s the kind of help that you notice most of all during the difficult times, of which there have been a few during my time here.

I’d like to especially thank you for making up a song for me and you should know that every time I heard you singing it, it was like an extra injection of strength and motivation, even helping me to overcome pain occasionally during a game.

Your unconditional support is the thing that ensures that this team manages to pull through in the most difficult circumstances; and I can assure you that the whole squad is aware of this and thanks you for it.

A football club isn’t just made up of players, coaches and directors. More than anything else it’s the supporters who make a club, and that perhaps is the ingredient which best distinguishes Liverpool Football Club from every other team. The supporters.

Because if one thing has remained obvious to me after these few years, it’s that with supporters like you, Liverpool Football Club will never walk alone.

I really hope that the club wins lots of major trophies in the future; I’ll be following it all from a distance, with the pride that you can only get from having been a Red and played for the home team at Anfield – a ground that every football fan must visit at least once in their life.

Thank you for everything. Yours most sincerely,