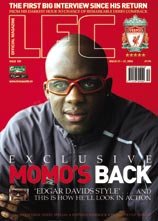 >”It was an awful time. There were lots of lonely hours at home when I was very worried and very scared about what was going to happen. It was such a bad injury.

>”I don’t mind admitting I cried a lot. I thought ‘this can’t be happening to me’. It didn’t seem possible that I could be in this situation. I just had to lie there and rest and hope that my vision would get better. It was only a couple of weeks but it felt much, much longer.”

>”I wasn’t happy when the Portuguese doctor told me that because all I want to do is play football,” he added. “He said that football was finished for me. I didn’t like that. I didn’t believe that. We went to see other specialists and thankfully things have got a lot better.

>”I knew I had a big problem and I knew what people were saying, but I tried my best to stay positive and to be as calm as possible. I had a lot of support from a lot of people and they helped me a tremendous amount.

>”Three weeks ago I had zero vision in my right eye, now it’s about eighty per cent so that is a quick recovery. It’s hard to say if it’ll ever be perfect. There’s a chance it might but also a chance it might not. Only time will tell. The big thing for me is I can play football again. That’s all I want to do.”